To Refuse or Not to Refuse 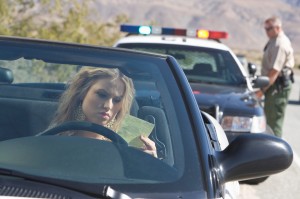 When an officer pulls you over under a suspicion that you may be operating a vehicle while intoxicated, he must then develop probable cause before offering a chemical test.  Developing probable cause happens in a number of different ways.  He can use his observation skills to determine if the suspect shows physical signs of intoxication such as red and watery eyes, slurred or unclear speech, soiled clothing or the smell of an alcoholic beverage.  The officer can also have the driver submit to pre-exit testing such as divided attention tasks, repeating a portion of the alphabet, generally C-N, or having the driver count backwards from a specified starting point to an end point.  The officer can have the driver participate in standardized field sobriety tests.  Finally, the officer could have the driver submit to a portable breath test but this is not a certified chemical test.

The driver is given an option of taking the certified chemical test or refusing to do so.  Both decisions carry consequences that can significantly affect the driver’s rights and his ability to effectively defend himself at a trial.  The Indiana Courts have held that a person is not entitled to speak to an attorney prior to making this decision.

Should a driver submit to the chemical testing, that result can be used against him in court at trial.  Additionally, if the State files charges of Operating a Vehicle While Intoxicated against the driver, the court can recommend to the Bureau of Motor Vehicles that the driver’s license be suspended for a period of 180 days if there is probable cause that the driver did submit to and fail a chemical test while the case is pending.